Each class has an allocated saint whose example they try to follow:

We also recognise other important saints whose lives help us to follow in Jesus' footsteps.

Our Lady, also known as our Mother, the Virgin Mary, is a lady that had no sin and that's why God chose her to be Jesus' mother.

At first, Joseph didn't believe Mary when she told him about the visit from the angel. To finally understand the truth Joseph needed to see the dreams of an angel telling him what had happened.

Mary's parents, Joachim and Anne, were loyal people in front of God. They prayed every night asking God to give them a child. Six years after they were married, they had welcomed Mary into their lives and they knew that she was a special gift from God.

When Mary was three years old, Joachim and Anne took her to the temple and gave their child to God. Mary spent nine years in the temple.

She was a wonderful mother to her son, Jesus. She also cares for each one of us. 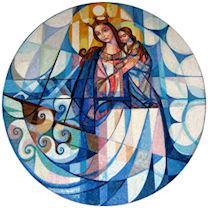 Thomas was born in Italy 1225. He had eight siblings and he was also the youngest. Before Thomas was born, a holy hermit shared a prediction with his mother saying that he would become a great learner. He did just that! Thomas was a prolific writer and is known to be author to nearly 60 titles of varying lengths.

Thomas joined the Abbey of Monte Cassino and trained with the Benedictine Monks when he was only five years old.

After Thomas completed his education, he devoted himself to a life of travelling, writing and teaching amongst many other things. He was a great philosopher, and believed that the existence of God could be proven in five ways.

In 1274 Thomas went on a trip to Lyon, France, unfortunately he never made it there. He fell ill at the Cistercian monastery of Fossanova, Italy. He died on 7 March 1274.

Saint Thomas Aquinas is patron saint of a vast number of things (22), some include: students, pencil makers, catholic schools and colleges, learning. 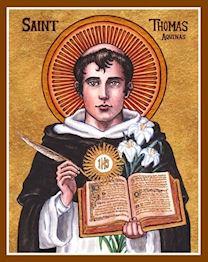 Saint Alphonsa was a Sister from Kerala in India. Though she suffered frequent bouts of illness, Sister Alphonsa was interested in doing the charitable work of improving the living standards of the people around her, especially those with disabilities.

Saint Alphonsa is popularly known as a person who loved and invited loving suffering. She is called the 'Little Flower' of India and became the first woman from India to become a saint.

Saint Alphonsa was born as the fourth child to Cherian Ouseph and Mary Muttathupadathu in the year 1910. When she was young, St Alphonsa lost her mother, and she was looked after by her aunt. As she grew, her faith in God became stronger and she followed her vocation and became a nun in 1936.

On October 12, 2008, Pope Benedict XVI announced St Alphonsa's canonization at a meeting in St Peter's Square. In that canonization ceremony, many people from India had participated, including a boy from Kerala whose clubbed foot had been healed by Saint Alphonsa when he prayed to her in 1999. We celebrate her feast day on 28 July.

Francesco, named in honor of Saint Francis of Assisi, was born to Giuseppa and Grazio Forgione, peasant farmers, in the small Italian village of Pietrelcina on May 25, 1887.

From his childhood, it was evident that he was a special child of God. Francesco was very devout even as a child, and at an early age felt drawn to the priesthood. He became a Capuchin novice at the age of sixteen and received the habit in 1902. Francesco was ordained to the priesthood in 1910 after seven years of study and became known as Padre Pio.

On September 20, 1918, Padre Pio was kneeling in front of a large crucifix when he received the visible marks of the crucifixion, making him the first stigmatized priest in the history of Church. The doctor who examined Padre Pio could not find any natural cause for the wounds. Upon his death in 1968, the wounds were no longer visible. In fact, there was no scaring and the skin was completely renewed. He had predicted 50 years prior that upon his death the wounds would heal. The wounds of the stigmata were not the only mystical phenomenon experienced by Padre Pio.

The blood from the stigmata had an odour described by many as similar to that of perfume or flowers, and the gift of bilocation was attributed to him. Padre Pio had the ability to read the hearts of the penitents who flocked to him for confession which he heard for ten or twelve hours per day. Padre Pio used the confessional to bring both sinners and devout souls closer to God; he would know just the right word of counsel or encouragement that was needed.

Even before his death, people spoke to Padre Pio about his possible canonization. He died on September 23, 1968 at the age of 81. His funeral was attended by about 100,000 people. On June 16, 2002, over 500,000 Padre Pio devotees gathered in Rome to witness Pope John Paul II proclaim Padre Pio, Saint Pio of Pietrelcina. 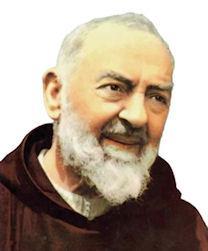 He did not study very much. Francis did not easily find his vocation in life. He didn't know what God was calling him to do. During his early life, he wasted a lot of his time spending money and having fun but he realised later on that he should give what he had to the poor. He ended up living a very poor life himself.

Francis followed the example of Jesus closely by living a simple life and teaching the Gospel message with great joy. The great Franciscan order of priests and brothers follows his simple lifestyle. Francis insisted that they should not own anything. He wanted his priests to love poverty as he did.

Saint Francis loved all creatures and the birds and animals happily obeyed his commands! As a reward for his great love, Jesus gave him his own wounds: two in his hands, two in his feet and one in his side.

Toward the end of his life, he became very sick. He was told he would live only a few more weeks and he exclaimed, "Welcome, Sister Death!" He asked to be laid on the ground and covered with an old habit. He advised his brothers to love God, to love being poor and to obey the Gospel. "I have done my part," he said. "May Jesus teach you to do yours". 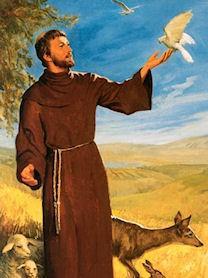 Saint Bridget, more properly Brigid, one of the patron Saints of Ireland, was born at Faughart in County Louth. Her birth date was around 460. Her mother was a slave-girl, but the child was acknowledged by her father, a Prince of Ulster, and given to a foster mother to rear.

Having been instructed in letters and embroidery and household duties, she was sought in marriage by an eager suitor whom she rejected on the grounds that she had vowed her life to the Lord. Refusing to marry, she chose a life of seclusion, making her cell, the first in Ireland, under a large oak tree. The place was called Kil-dara, 'the Church of the Oak'. The city of Kildare is supposed to have derived its name from Saint Brigid's cell.

The Life of Saint Brigid written in the 7th century represents her as a new type of Irish Woman - the Christian Saint. Her likeness to modern missionary sisters is remarkable; she often left Kildare in her chariot, doing the work of the Lord's charity in distant parts. To her countrymen she was 'the Mary of the Gael', and when they went as missionaries and pilgrims to the Continent of Europe, they spread devotion to her whenever they settled.

Just as the shamrock is associated with Saint Patrick, so is the tiny cross made of rushes linked to Brigid. While explaining the Passion to a dying pagan, she wove a cross from the rushes strewn about the floor. They are still made in Ireland today and placed in the rafters of cottages on Saint Brigid's day (1 February) to ward off harm. 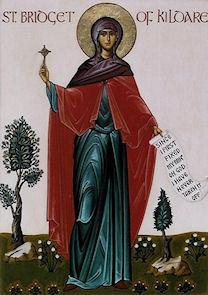 Lucia of Syracuse (283–304) is one of eight women to be mentioned in the Canon of the Mass alongside Mary.

Lucy's father died when she was five years old and therefore was raised by her mother. Lucy decided at a very young age that she wanted to dedicate her life to God. Lucy's mother, however, arranged for her to marry a young wealthy boy – Lucy didn't want to.

Then Lucy's mother got very ill. Lucy prayed regularly to Saint Agatha and went on pilgrimage in hour of Saint Agatha and prayed for her mother to get better. Saint Agatha appeared to Lucy in a dream and told her that because of her faith her mother would be cured. In thanksgiving for this miracle Lucy wanted to give all of their money to the poor.

The boy that was promised to Lucy in marriage heard about them giving away their riches and wasn't happy. He ordered Lucy to worship the emperor and not God – Lucy refused. Therefore, he wanted to send her to a prison. However when the guards came to get Lucy she couldn't be moved... even when they attached oxen to her and tried to pull her away. Then they put bundles of wood around her and tried to burn her to death, or set the fire to get her to move. She didn't move and she didn't burn! Eventually they killed her using a sword. She was a martyr. She died because she refused to worship anyone but God.

Lucy's Latin name, Lucia, shares a root (luc-) with the Latin word for light, lux. This has played a large part of Saint Lucy being named as the patron saint of the blind and those with eye-trouble. In pictures she holds a plate with eyes on to represent the link with her name and light. She also holds a palm branch to show she was victorious over evil.

Her feast day is the 13th December where traditionally Lucy buns are made to celebrate. 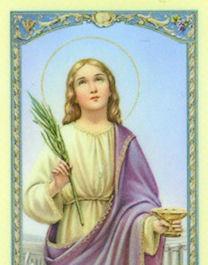